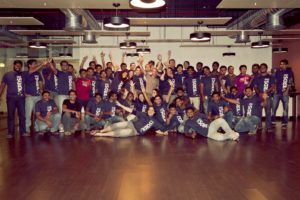 From 2011 to 2014, I have been leading projects and teams at KRDS agency, an expert in Facebook Marketing which has been part of Facebook’s Preferred Marketing Developer Program from its launch in Europe in 2010 and has handled over 1,000 campaigns across 30 countries for some of the world’s most prestigious companies.

Consistently striving to be at the edge of innovation sometimes pays off. Early 2013: Facebook invited over 260 agencies, all members of the Preferred Marketing Developer community across 35 countries, to enter the “Innovation Competition”. During the following months, PMD agencies were challenged to build innovative products that revolve around Facebook News Feed and Advertising platforms.
After two months of dedicated hard work on concept creation and development, KRDS has won the competition with its Feedizr ad-tool. Asserting the expertise of the company at a worldwide level, being the only non-American winner among the 260 competitors.